MAHB Annual Meeting
January 25th, 2021 at 7pm est
All current MAHB members have been emailed the Zoom log-in
​The "meeting" part of the evening will be short - the election of the Board, discussion of 2021 MAHB plans, and then we get to the FUN part of the evening.  We'd love our members who are breeding to tell us some of their breeding plans for the season and we can have an open discussion on bloodlines, horses, breeding questions, etc.  This is always more fun with photos/pedigrees/video/etc so if you are willing to share some info on your mare(s) send to Natalie ahead of time and she can be set up to share her screen with everyone on the Zoom call.

Dr. Ludwig Christmann began his employment with the Hanoveraner Verband in 1984. He worked for many years as Deputy Breeding Director. In 1996 he obtained his doctorate degree with “The development of breeding values based on the evaluation of mares in studbook inspections and mare performance tests.” He has been editor of Hannoveraner Jarbuch Hengste since 1999 and is a member of the Interstallion working group of the World Breeding Federation for Sport Horses. In 2002 Dr. Christmann became managing director for the Verband’s breeding abroad. Dr. Christmann is married, and he and his wife have three adult daughters, two of whom are riders. In his spare time he breeds his own horses and currently has three Hanoverians at home. 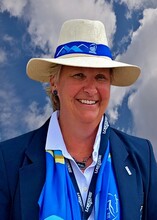 Educational Webinar ~ October 27th, 7pm
Guest Speaker Kristi Wysocki
How to relate the conformation & movement of the dressage horse
to their rideability, training and soundness.
Kristi Wysocki is a FEI 4* Dressage and FEI 5* Para Dressage Judge and FEI Para Technical Delegate. She is a U.S. Equestrian Dressage ‘S’ Judge and ‘R’ Dressage Sport Horse judge. She has judged many CDIs and CPEDs in the U.S., Europe, Australia, Russia, Canada and Central/South America. She judged the para dressage at both the 2018 World Equestrian Games and the 2017 European Para Dressage Championships. She has judged the U.S. Young Horse Finals, U.S. Dressage Festival, USDF Regional Championships and the USDF National Dressage Championships numerous times. Kristi has judged dressage sport horse shows such as Dressage at Devon on many occasions including many USDF Breeder Series Finals around the U.S. Kristi has successfully trained and ridden many horses from starting youngsters to Grand Prix Dressage. She has competed several horses to the FEI levels, winning many regional and local championships through Grand Prix.  She also successfully competed in the CDI arena with multiple horses. She has earned her bronze, silver and gold medals from the USDF along with many of her students.
​
Kristi is the primary author of the USDF Dressage Sport Horse Seminars and Judges Training curriculum. She is currently co-chair of the USDF Sport Horse Committee, faculty member for the USDF Sport Horse Seminars, approved faculty for Dressage and Dressage Sport Horse Judges Training, member of the USDF Licensed Officials Task Force, member of the USDF Judge’s Committee, member of the USDF Test Writing Working Group and member of the USDF Proposed Rule Change Working Group. She has previously served on the USEF Dressage Sport Committee, USEF Para Technical Committee and the USEF International Disciplines committee and member of the FEI Classification Reference Group. Her experience on these committees has also enhanced her education and understanding of the sport from the grass roots to the international level. She has been intimately involved in developing the USEF dressage tests for the last 10 years and the USDF Sport Horse Scoresheets for the last 12 years.

Though Paul’s business ranged over all equestrian sports and disciplines, his support of Hanoverian breeders began without peer, and grew exponentially over time, sponsoring many local Hanoverian club interests, and expanding to the National level.  What started in 2004 with some class sponsorships of the Mid-Atlantic Hanoverian Breeders Club Inc. (MAHB) Mare Show classes, quickly grew from there to include MAHB inspection competitor parties and Hanoverian Sales Fests. In 2007, he conceived the AUIZHI/MAHB-Bred Awards, and was the sole sponsor of $2000 in annual prizes at Dressage at Devon distributed to the top MAHB-breds in the breed show, and to their current owners. He continued this important program until the sale of his business in 2015 due to health reasons.  His generosity continued as one of the founding sponsors with contributions to national level ALL-AMERICAN HANOVERIAN YOUNG DRESSAGE HORSE AWARDS, a contribution he sustained for years.

Paul’s assistance to all things AHS didn’t stop with monetary contributions. He attended so many Hanoverian functions including local inspections, Sales Fests, the Breed Show days at Dressage at Devon, stallion tests, and AHS Annual Meetings all over the US. He was always willing to lend a hand, whether as a certified Emergency Medical Technician, moving jumps for a MPT, or serving as Hanoverian cheerleader extraordinaire.
In addition to all this, Paul was a tireless volunteer at home in Maryland, giving back to his local community of Westminster as an EMT/Firefighter and volunteer to numerous civic organizations and scholarship efforts.

​Paul will be so very missed.

SPS Galaxis - a 1989 imported States Premium Hanoverian mare by Ganymed/Black Sky xx/Wohlstand. Galaxis is pictured here at the age of 14 with her ribbon for Overall Reserve Champion Mare at the Mid-Atlantic Hanoverian Breeders Club Mare Show in the fall of 2003.  She was pregnant at the time by Landkoenig.  At the time, I was leasing the mare from Kasey Nesbitt and eventually bought her a year or so later.  I loved that mare...

George Walker was one of the judges and commented on this mare's modern type already from a decade plus prior (before “modern” was fashionable).  Mary Lou Winn’s mare was champion (from Suzanne Quarles’s breeding program).  I’m thinking that this may have been one of the first years of the “Mare Show”.      ~ Rick Toering, MAHB Member